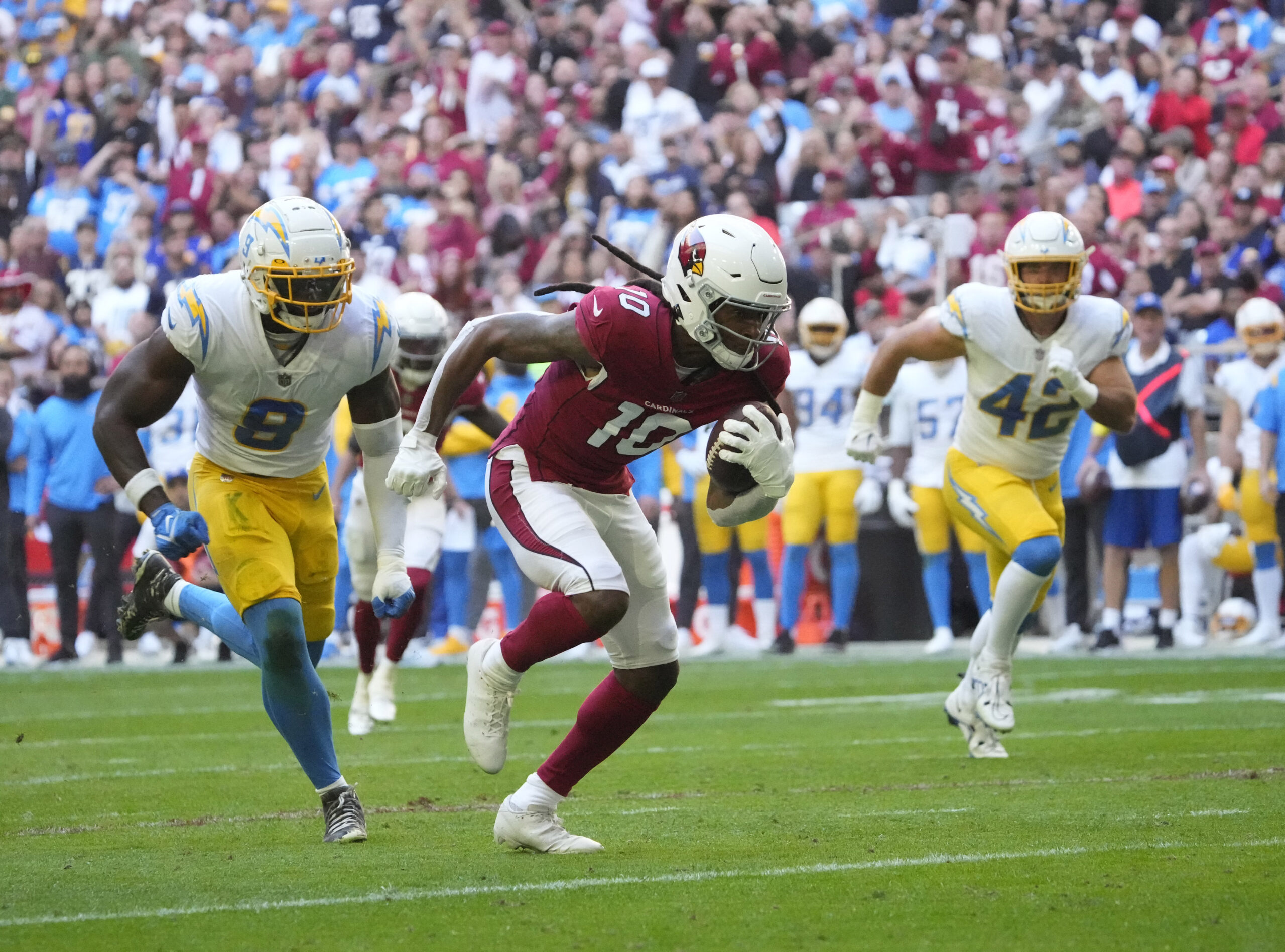 The Arizona Cardinals played their best first quarter of the season to start a Week 12 battle against the Los Angeles Chargers.

After Arizona jumped out to a 10-0 lead, the Chargers scored fourteen unanswered.

But because of a late second quarter touchdown from Kyler Murray, the Arizona Cardinals have a rare lead at the end of the first half.

The Cardinals’ defense began the game with a J.J. Watt third-down sack. Giving the ball quickly back to the offense, it was looking promising for Arizona.

An 11-yard pass to Hollywood Brown (in his first game back from injury) was followed up by an electric 18-yard rush by James Conner.

However, all momentum was quickly lost after Conner fumbled the very next play.

Thankfully, the Cardinals defense came up big, and for the second drive in a row, Justin Herbert was sacked on third-down.

This time, Arizona capitalized on the defensive stop with a long and methodical drive.

But it was a 33-yard catch and run by Hopkins that got the Cardinals into the end zone.

At the end of the first quarter, the Cardinals’ offense accounted for 72 rushing yards, their best on the season.

Kyler Murray finished perfect through the air as well. Going 6-6 for 71 yards and a touchdown, Murray connected with five different receivers, spreading the ball all over the field.

After the field goal, the Chargers wasted no time getting back into the game.

Six straight passing plays from the offense carried LA quickly down the field. The 11-play, 60-yard drive was finally capped off with a 2-yard touchdown pass to Kennan Allen.

The absence of TE Zach Ertz loomed over the Cardinals’ heads on a crucial third-down attempt.

On a designed quarterback run, rookie tight end Trey McBride missed a block. This error resulted in Kyler Murray being short of the first down.

To make matters worse, Kliff Kingsbury kept the offense on the field. On a fourth-and-inches attempt, Arizona went for the long ball, which was intercepted.

Kyler Murray goes deep to Hopkins on 4th down and gets picked off by Derwin James! #Chargers pic.twitter.com/BwX1LxMqgg

As a result, the Chargers took over with the football in excellent field position, in which they capitalized on.

Four players later, Los Angeles took their first lead of the game. It was a 33-yard pass to DeAndre Carter on a blown coverage by the Cardinals’ defense.

Arizona ended the first half on a high note. A long drive consisting of multiple third-down conversions allowed the Cardinals to put points on the board to finish the second quarter.

Kyler Murray did it himself with a pair of runs, the final one going for 5 yards into the end zone.

It was a 14-play drive that sent the Cardinals into the half with a lead.