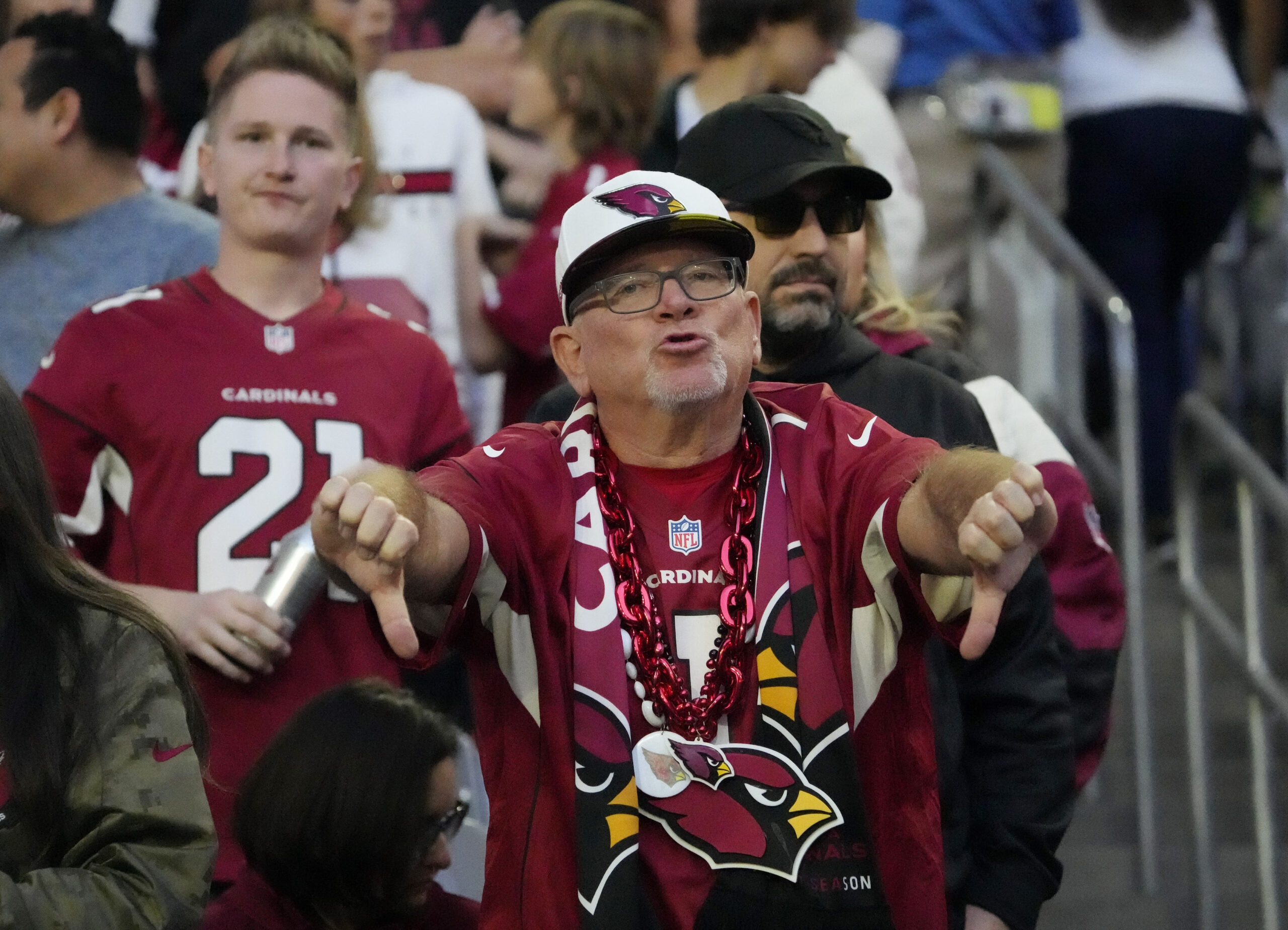 Nov 27, 2022; Glendale, AZ, USA; A fan of the Arizona Cardinals gives the thumbs down after the Los Angeles Chargers took the lead during the fourth quarter at State Farm Stadium. Mandatory Credit: Michael Chow-USA TODAY Sports
Spread the love

After a promising start, the Arizona Cardinals lose another heartbreaker and fall to 4-8 on the season.

It was a failed offensive effort in the fourth quarter that resulted in a late Chargers’ comeback.

In total, the Cardinals’ offense recorded 28 yards throughout three drives.

While the offense stalled, Arizona’s defense also forced three straight three-and-outs. However, this eventually gave way, and Justin Herbert took advantage of a tired secondary with time running out in the fourth quarter.

A 1-yard touchdown pass to Austin Ekeler with 15 seconds left in the fourth quarter seemed to send this game into overtime. But instead, the Chargers elected to go for two, which paid off big time, giving them a 25-24 lead.

Meanwhile, Kyler Murray threw for only 75 yards in the second half, finishing the game with less than 200 yards in the air.

The Cardinals had two takeaways overturned.

In the second quarter, Arizona’s defense seemed to come away with a huge fumble. However, after further review, the call was reversed and was ruled a recovery by the Chargers.

As a result, Justin Herbert connected with Keenan Allen to give the Chargers their first points of the game.

The second overturn came in the fourth quarter. Zaven Collins looked to have the first interception of his career, but once again, the officials overturned the call, and it may have cost the Cardinals the game.

Instead of Arizona’s offense taking over in field goal range, the offense began backed up inside their own 20. A quick three-and-out later, the Chargers had the ball right back in their hands.

Arizona’s rushing attack was one of the few positive takeaways from this Week 12 matchup.

Kyler Murray added another 56 yards and a touchdown.

Unfortunately, this was not enough, as the passing game lagged in the second half, ultimately preventing a Cardinals victory.

There were plenty of mistakes that ended up being killers for Arizona.

It was his first of the season.

The Cardinals went for it on 4th down only once today, and it was unsuccessful.

After what looked like an easy punt call, Kliff Kingsbury went for it on 4th and inches. Yet instead of a quick QB sneak or handoff to James Conner, Kyler Murray threw it deep, which was intercepted.

Although it is hard to blame Matt Prater, a missed 49-yard field goal ended up being the difference maker in this game.

Arizona bolted out of the second half with a couple of huge runs. But the drive was halted after a false start was called on backup center Billy Price.

Heading into the bye

Unfortunately for Arizona, they will be forced to sit with this loss for a couple of weeks.

With a Week 13 bye, the Cardinals will not have the opportunity to make up for this loss until December 12th against the New England Patriots.

There is plenty to discuss inside the locker room, as 4-8 is not where this team expected to be at this point of the season.