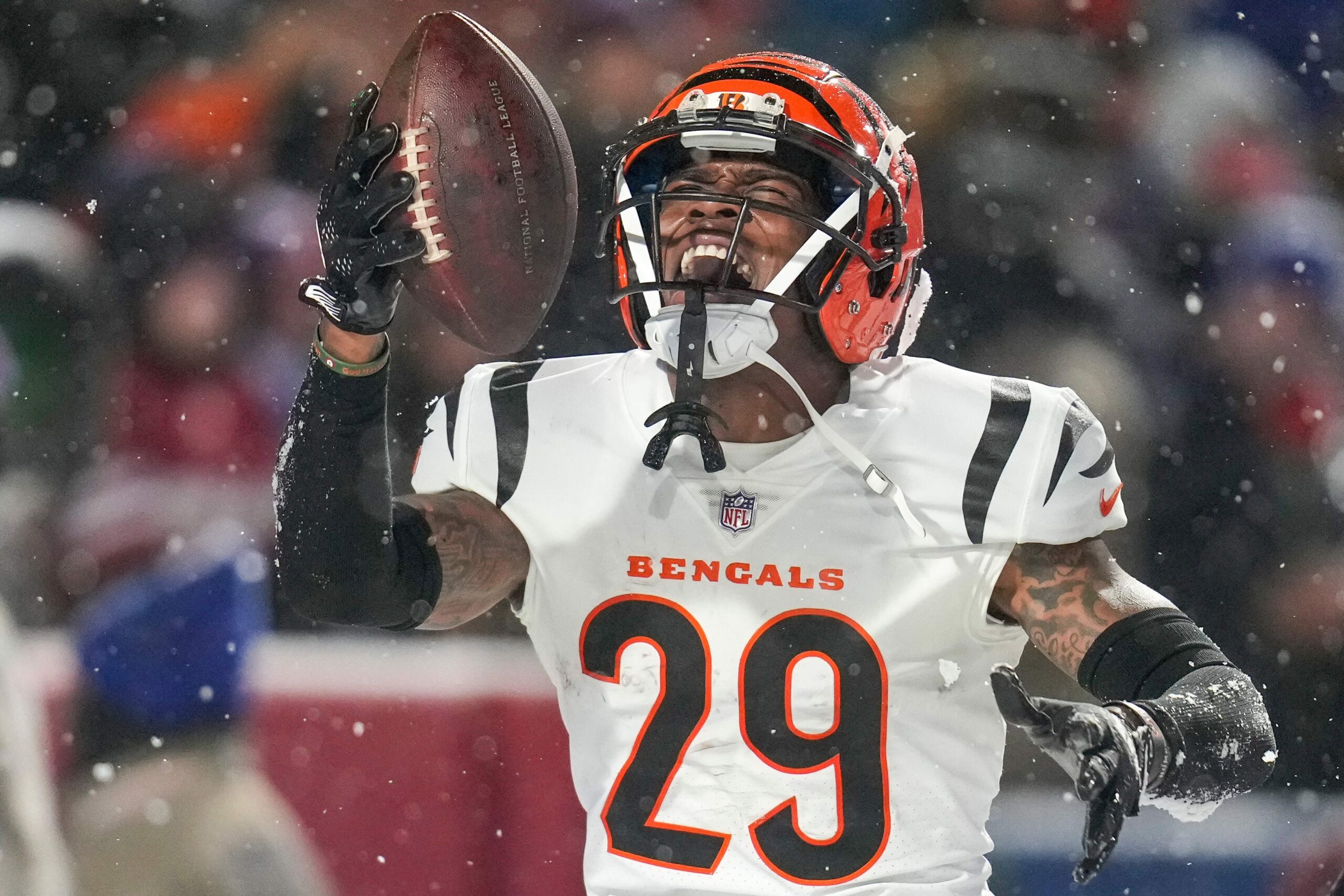 Cincinnati Bengals cornerback Cam Taylor-Britt (29) celebrates after intercepting a pass to seal a Bengals win in the fourth quarter of the NFL divisional playoff football game between the Cincinnati Bengals and the Buffalo Bills, Sunday, Jan. 22, 2023, at Highmark Stadium in Orchard Park, N.Y. The Bengals won 27-10 to advance to the AFC Championship game against the Kansas City Chiefs. Cincinnati Bengals At Buffalo Bills Afc Divisional Jan 22 227 Syndication The Enquirer
Spread the love

One of the best weekends of the NFL season is just a few days away.

Just seven months ago, Week One began with 32 teams suiting up, that number has now slimmed down to just four.

But only two will stay alive to fight in Glendale, Arizona, on February 12th.

On the AFC side, the #1 seed Kansas City Chiefs will battle with the #3 seed Cincinnati Bengals, a matchup that has quite a history.

And for the NFC, it is the #1 seed Philadelphia Eagles against the #2 seed San Francisco 49ers. Two young quarterbacks, two explosive offenses, and two extremely passionate fan bases, what more can you ask for in a football game?

Get your popcorn ready for this Sunday.

What would the AFC Championship be without Patrick Mahomes.

Since taking over as the Chiefs’ starting quarterback in 2018, Mahomes has led his team to the AFC Championship Game five years in a row. This ranks second all-time, tied with Ken Stabler and the Oakland Raiders in the 1970s.

However, just like every great quarterback, Mahomes has his kryptonite.

Joe Burrow, the former first-round pick, has a 3-0 record against Patrick Mahomes in his three-year career.

This undefeated record includes a comeback victory against the Chiefs last year in the conference championship.

It has been a year since this dramatic game, and finally, we will get the much-anticipated rematch.

Let’s face it: Patrick Mahomes has not gotten the attention that he deserves based on his performance this year.

Maybe this is just because fans are tired of talking about the latest Mahomes crazy throw or because eyes are turning to the new set of flashy quarterbacks, but one thing is for certain: Mahomes is putting up numbers that are not human.

First it was the Bills, and now it is the Bengals, but what about the Chiefs?

It is almost as if they went 13-3 (tied for the best record in the NFL) and found a way to fly under the radar, practically unnoticed.

Yes, Patrick Mahomes missed a few plays last week due to a sprained ankle, but somehow, the Chiefs are +1 underdogs against the Cincinnati Bengals, according to DraftKings Sportsbook.

Give me a Mahomes redemption game, a Travis Kelce multi-touchdown night, and a trip to a third Super Bowl in just five years for the Chiefs.

How could you not root for Brock Purdy’s true underdog story.

Sure, he has had the blessing of throwing and handing the ball off to a multitude of talented teammates, but let’s not underplay what Purdy has done in his short time in the NFL.

So far, the rookie has had seven multi-touchdown games, has a 67.1 completion percentage, and has recorded a 107.1 passer rating, which leads all quarterbacks.

Will the Cinderella story ever come to an end, or will Brock Purdy lead the 49ers to their first Super Bowl victory since 1995.

Unfortunately, standing in front of a happy ending is the NFC’s best team, the Philadelphia Eagles.

There is no doubt, the Eagles have the best offense in the NFL. Whether it’s a league-leading 268 rushing yards per game or a Jalen Hurts MVP year, this offense has been a force regardless of the defense they are up against.

Besides a fluke game against the Colts, in games where Jalen Hurts has started, the Eagles have not been held to fewer than 20 points.

And when you add in the fact that their defense leads the league in fewest yards against per game, the Eagles have the edge in this NFC Championship.

Watch for Philadelphia to control the ball through the ground, apply constant pressure to Brock Purdy, and take control of the game early on.

Pac-12 Basketball, How Many Can Make the Tournament?
A closer look at the three recent Diamondback signings
Loading More Posts...