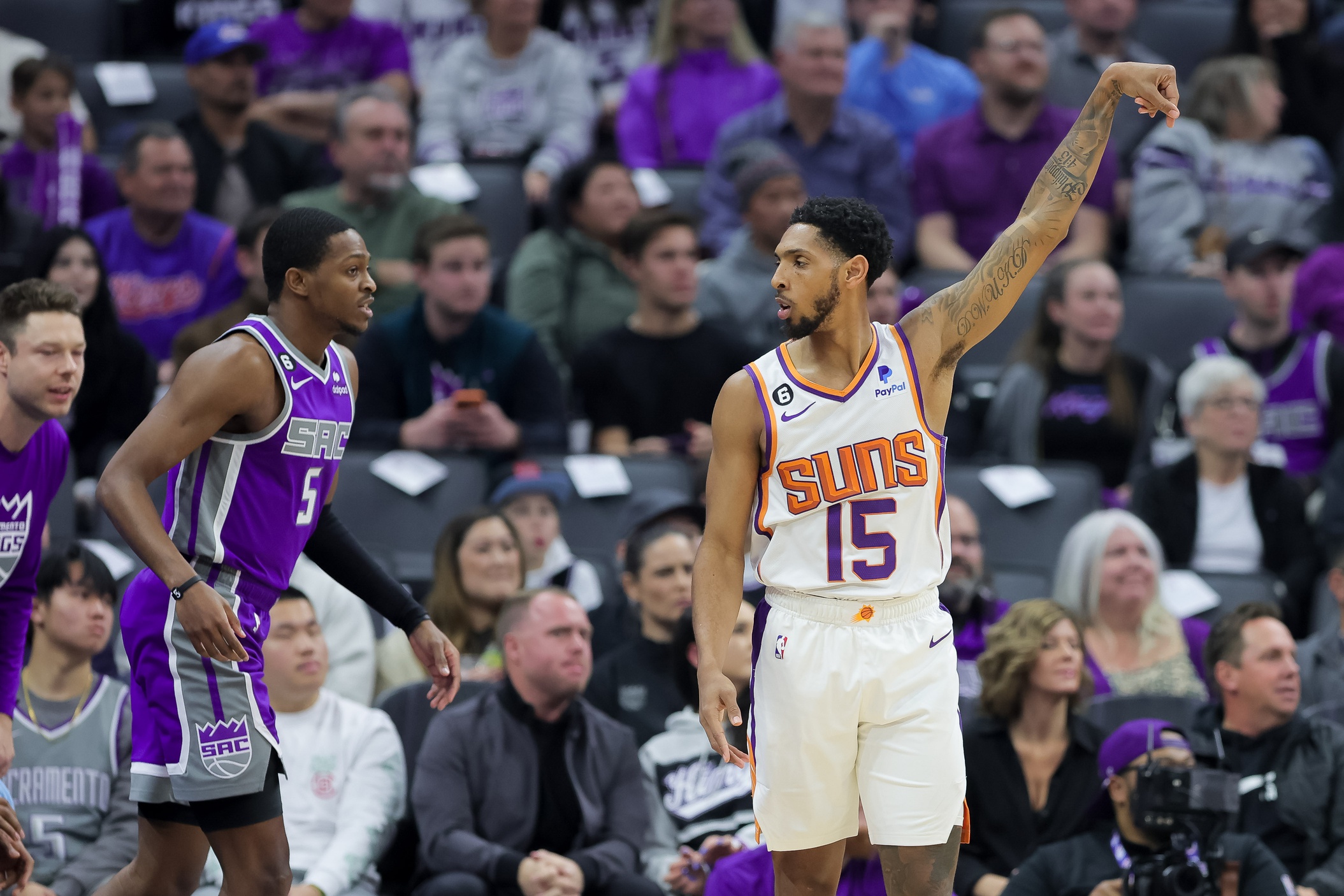 The Phoenix Suns were back on the road Monday as they visited the Sacramento Kings. Phoenix was on a four-game winning streak, and hoped to increase its streak while pushing Sacramento to its third straight loss.

The outing quickly became a scoring showdown in the first half, and both sides seemed to be heading to a down-to-the-wire contest.

Phoenix got all it could from its stars, and dug out a crunch-time 122-117 win over Sacramento.

The Suns learned quickly that they’d have to play with more pace than expected in order to keep up with a young, feisty Sacramento squad. Turnovers held the Suns back in the first quarter, allowing the Kings to hold a slight lead, which was halted after a 12-0 run by the Suns.

Devin Booker ended the quarter scoring 10 points along with five rebounds during the first quarter. That wasn’t the end of the star guard’s storyline however.

As time drew to a close for the half, Booker quickly got into a scoring match with Kings guard Malik Monk. Both teams were capitalizing off turnovers, leading to both guards making monumental buckets on the other end.

Booker lead all scorers with 21 points on 10-of-13 shooting at halftime.

The Suns were going to have to limit turnovers while getting more teammates involved in the second half. Phoenix had a 14-10 assist-to-turnover ratio at the end of the half.

Phoenix opened up the third quarter on a 7-0 run against Sacramento. The rest from halftime didn’t seem to slow Booker’s step. He was active on both ends of the court, leading to easy looks for the Suns on offense. He put up four quick points, giving the Suns a 10-point lead nearly halfway through the quarter.

Torrey Craig is coming into his own as his time as a starter progresses. He was up to 11 points on the night halfway through the third quarter, shooting 5-of-9 from the field.

A missed shot seemed to be the Kings’ worst nightmare, as the Suns were eager to sprint back up court for easy transition buckets. At the end of each transition, Booker seemed unstoppable. He was continuously in every defensive effort, while going for shots during the quarter that deflated the home crowd.

Despite Booker being determined to make a career night in Sacramento, the Kings made sure to stay in range of the Suns. Huerter became a force once more, and Malik Monk was reinforced backup in three-point shooting. Domantas Sabonis was also productive for the Kings’ frontcourt, putting up 13 points, seven rebounds and eight assists as time reached the three-minute mark.

Though Booker became the man of the hour, Deandre Ayton was having a decent night as well. Ayton put up 15 points and seven rebounds by the end of the third quarter. It was Booker’s 36-point night that was able to keep the Suns in front at the end of the quarter though.

Booker’s scoring became a phenomenal output, but the overall hope was that it would be enough to steer off a Sacramento squad full of capable scorers.

The Kings had other plans, however. Monk, Sabonis and Fox all looked to tighten up the lead margin for Phoenix, as they put together a run that cut the lead down to one for the Suns with time at the six-minute mark.

With Booker needing another scoring threat to step up, Damion Lee drew up his reliable three-point shot to extend the Suns’ lead during crunch-time. Lee knocked down two three-pointers in less than a minute, putting Phoenix up by five with four minutes remaining.

The Suns looked to put the game out of reach behind Booker’s 44 points. Yet Huerter made a defensive stop that put the game within reach for the Kings.

Even so, the Suns were able to hold off the Kings for their fifth straight win of the season. Phoenix will travel back home to host the Chicago Bulls next on Wednesday.