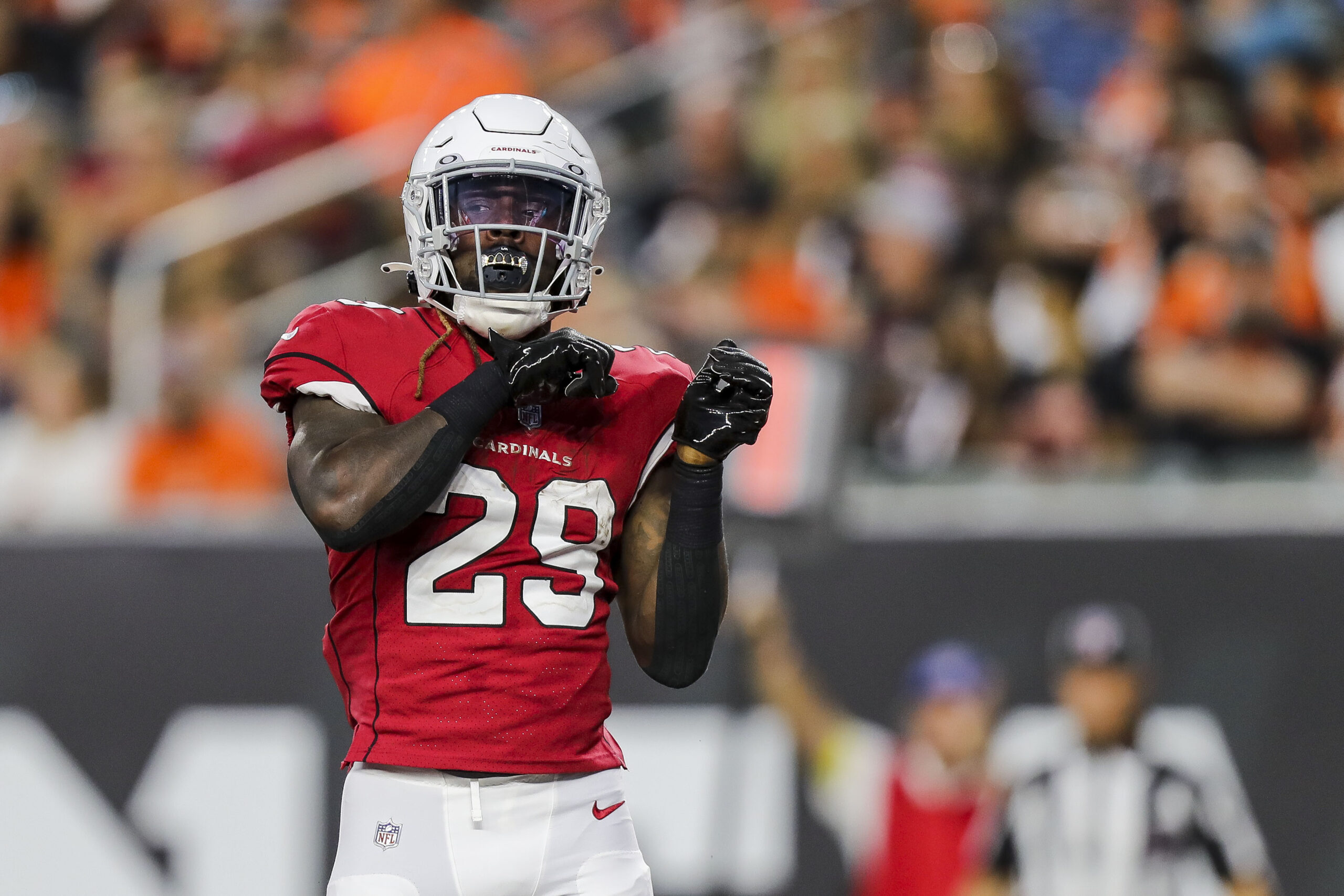 Arizona Cardinals running back Jonathan Ward (29) reacts after scoring a touchdown against the Cincinnati Bengals in the first half at Paycor Stadium. Credit: Katie Stratman-USA TODAY Sports
Spread the love

The Arizona Cardinals squared off against the Cincinnati Bengals for an exciting Friday night matchup to begin the team’s 2022 preseason.  Arizona is seeking to continue the current trend in the league and become the third straight team to win a Superbowl in their home stadium.

During the pregame, Murray spoke about why he was so passionate about staying in Arizona over the offseason.

When asked about what will define his legacy, he responded, “it’s all about winning”.

As expected, the Cardinals did not play their first-team offense so rookies along with backups got an opportunity to prove themselves.

The 36-23 victory was filled with plenty of new names for Cardinals fans to remember.

To begin the first quarter, McSorley went for the long ball targeting WR Andy Isabella who was held on the play. This 40-yard pass interference call led to a rollout of the pocket by McSorley and a dime to WR Andre Baccellia. The 4-yard touchdown pass put the Cardinals on the board first.

The extra point, however, was no good.

After a quick stop by the defense, the Cardinals started their second drive with a bang. Greg Dortch reached up and made a very impressive catch over the cornerback for over 30 yards. Matt Prater then got the opportunity for revenge after a missed extra point. The made field goal gave the Cardinals a 9-0 lead right off the bat.

Feel like everyone deserves to see this picture. pic.twitter.com/rrkTkJvRXX

A 23-yard field goal gave the Bengals their first three points of the game. The Cardinal’s defense did a great job in the red zone as they held Cincinnati at the 5-yard line for three straight plays.

Fans got their first look at USFL star, Victor Bolden Jr., as he saw his first action on the field for a kickoff return.

Unfortunately, Andre Baccellia found himself limping off the field after a third-down catch attempt. His night was declared over after suffering an ankle injury, further details are still unknown.

Cardinals WR Andre Baccellia down after that play. Not putting any weight on his right leg as he is helped up.

Following the three and out, an impressive 58-yard field goal, Even McPherson brought the Bengals closer making it a 9-6 game. McPherson continues to impress as he is coming off a season where he was 9-11 from 50+ yard attempts.

Joe Walker gave the Cardinals their first forced turnover of the pre-season. Bolden Jr. then brought Arizona into the redzone. This set up Jonathan Ward with the opportunity to run in what might have been the easiest touchdown he has ever scored. The touchdown grew their league to 16-6 with 5 minutes left in the first half.

Ward after the game: “That’s one of the best feelings” running up the middle for a touchdown”

Mcpherson then really showed off his leg by drilling a 56-yard field goal with still some wiggle room.

With two minutes left, McSorley showed off his ability to navigate away from traffic as he launched a deep ball to Andy Isabella. Thie throw and catch gave the Cardinals excellent position right outside the red zone. Capitalizing on this field position, Jonathan Ward ran in his second touchdown of the game.

With a minute left in the quarter, linebacker Victor Dimukeje got himself a strip sack but, the Bengals would go on to recover the football. Nevertheless, a punt was forced on the defensive play.

The Bengals began the first half with a quick three and out. This was then followed by a shifty 55-yard punt return by Greg Dortch.

Jarrett Guarantano took over at the quarterback position replacing Tracy McSorley. Jarret was able to capitalize on the opportunity quickly with a six-yard touchdown pass to Jontre Kirkland.

That's the Cardinals scoring, for those unsure.

The former LSU WR hit the griddy which did not go too well with Bengals fans across social media.

Once again, Prater followed the touchdown with a missed extra point.

Christian Matthiew, close to an interception, kept the Bengals from completing a third down attempt handing the ball right back to Arizona’s offense.

Following the great defensive play, the Cardinals drove down the field in a lengthy fashion. The long drive accumulated over 7 minutes from the clock and concluded with a Keaontay Ingram 1-yard rushing touchdown. Prater was able to put the extra point through the uprights.

Arizona illustrated some very impressive defense and kept the mistakes to a minimum. Through the first three quarters, there was only one penalty committed.

Yet another defensive play by the d-line began the 4th quarter. Jessie Lemonier started with a powerful strip sack. Unfortunately, once again the Bengals were able to recover. With that being said, the sack led to a quick three and out.

Before the game began, GM Steve Keim did confirm that Kyler Murray would be calling plays in the fourth quarter. His expectations were that Murray would bring creativity to the table along with some trick play actions.

Murray may have some more work to do when it comes to play calling. His first drive with the headset on resulted in a punt from their endzone.

In what was the first long drive for the Bengals, Cincinnati took advantage of the good field position and score just their first touchdown of the game.

Kyler once again found trouble calling any sort of offense. The team had a quick three and out in which they struggled to gain even five yards.

In what may have been a sign of fatigue, the Bengals found themselves in the endzone for the second time in the second half with a deep touchdown pass.

Although it is preseason, the Cardinals started of 2022 with a victory.  Tracey McSorley in the first half alone recorded 163 passing yards, one touchdown, and a 104.7 QBR. Jonathan Ward ran two touchdowns in averaging almost 4 yards per carry.

The defense also generated quick stops and were able to eliminate mistakes via penalties. Arizona held the to the opponent to less than 70 rushing yards.

The Cards will have their first preseason game at home in State Farm Stadium next Sunday against the Baltimore Ravens.