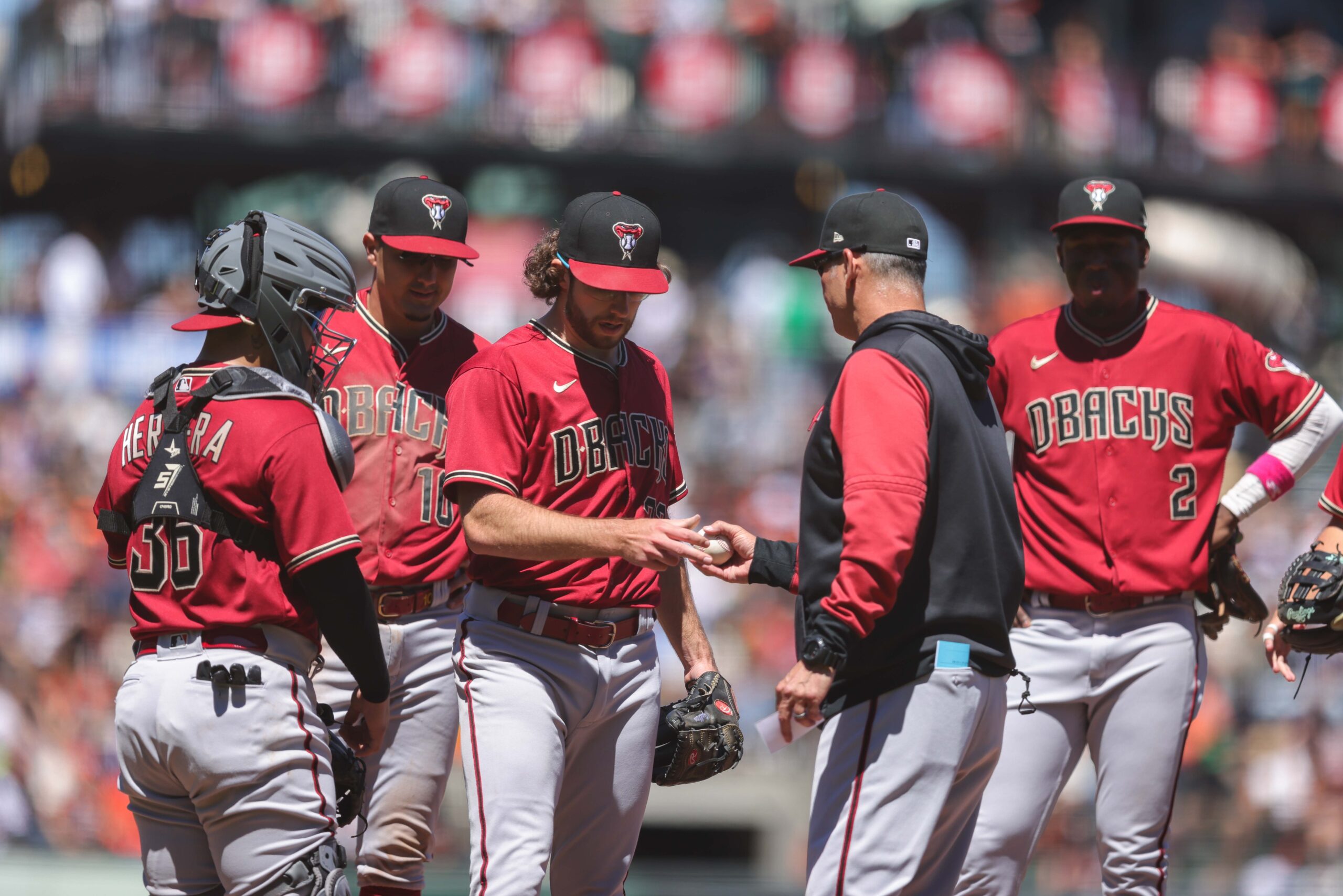 Arizona tries to win their first series in San Fransisco since august 2019 on a sunny Wednesday afternoon at Oracle Park. The Diamondbacks came out hitting early, scoring first on a base clearing triple off the right field wall by Daulton Varsho in the 2nd inning. Ketel Marte added a run in the 3rd inning on a solo home run to dead center field giving the D-backs a 3-0 lead. For most of the game the Arizona defense was flashing the leather making play after play keeping the Giants offense in check.
Zac Gallen was impressive, starting off slow, finding his rhythm after 3 innings once he started attacking the strike zone a little more. He was in his groove, until the 7th inning when everything abruptly fell apart. After holding the Giants scoreless through 6 innings, Gallen gives up a solo home run to Brandon Belt in the 7th, opening the flood gates.
All-Star relief pitcher Joe Mantiply continues to be cursed by the all-star selection, having his second rough outting in a row since getting the honor. He gave up a solo home run over the left field wall to Wilmer Flores that tied the game at 3-3 in the bottom of the 8th inning.
Diamondbacks showed life in the top of the 9th inning with a lead off double and a wild pitch moving the runner to third base with only 1 out. So, you’re saying theres a chance? However, the momentum came to a screeching halt as Josh Rojas argues a check swing call with 3rd base umpire and striking out on the ensuing pitch.
In response the Giants came out hot in the bottom of the 9th inning starting with a lead off single by Brandon Belt, who put his team on his shoulders today. Three batters later and with the bases loaded short stop Brandon Crawford came to the plate and hit a rocket of a line drive into right field bouncing square off of the right fielders glove. Regardless if it was caught or not, it would of won the game being deep enough for the runner at 3rd to tag up and make it home safely, yet it was exasperating watching the out fielder simply drop the catch.
It symbolized the theme of the D-Backs falling apart late and losing close games which has continued all season. Showing that this young core still needs a little longer to gel together, grow, and learn how to win. The upside, losing close games means you are being  competitive, and thats something the 2022 D-Backs can hang their hats on.
With an off day tomorrow they will get ready for the last series before the All-Star break, going up against the division foe San Diego Padres starting Friday night. Probable starters being Bumgarner, Gilbert, and Kelly.