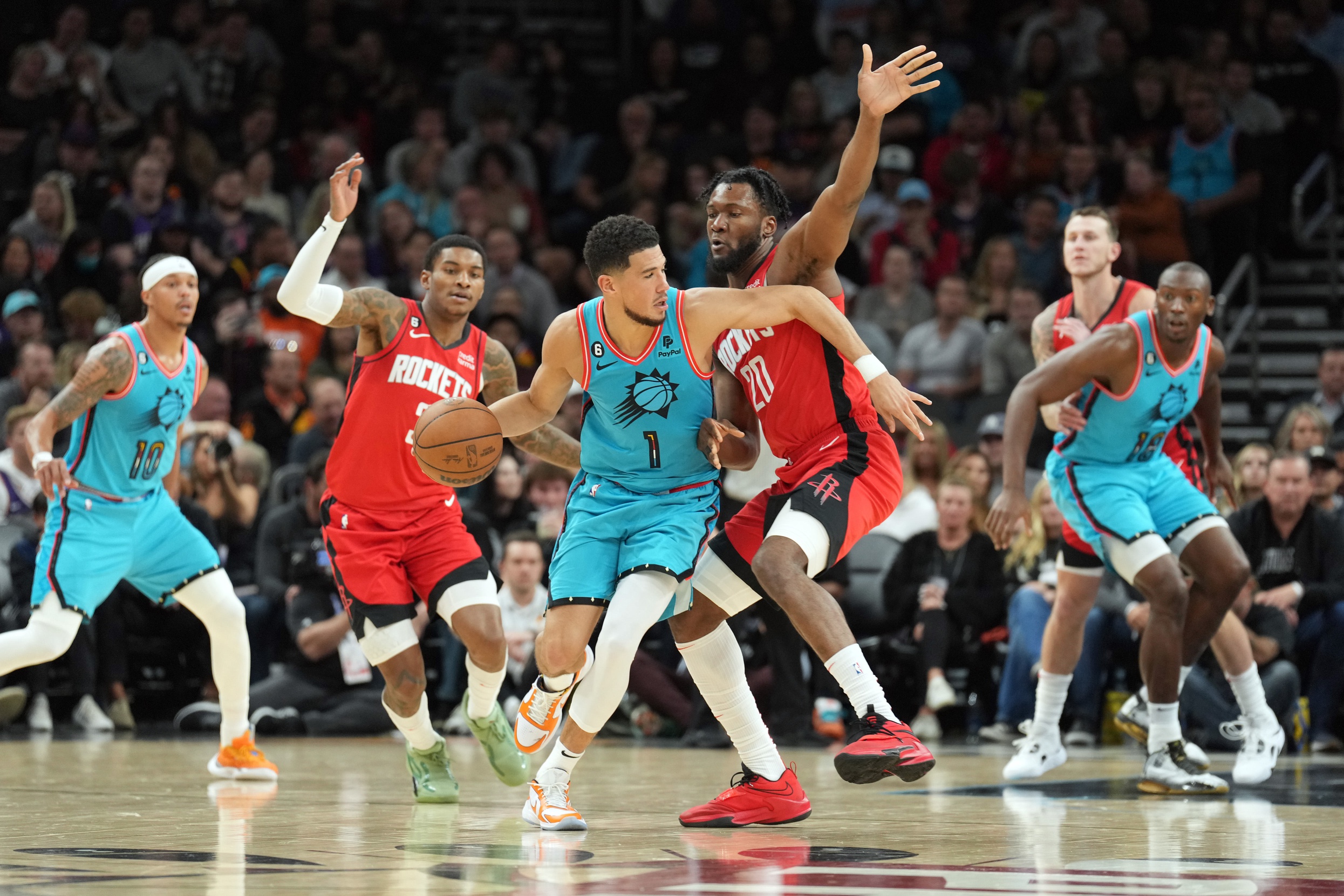 Seven in a row had a nice ring to it for the Phoenix Suns, and yet that wasn’t the final ruling after losing to the Houston Rockets. Phoenix, first in the Western Conference, hosted Houston on Friday night following a dominant win over the Chicago Bulls.

The Rockets have no clear expectations this season, as they currently are last in the Western Conference. Still, the Rockets made sure to make the contest on Friday interesting during the first half and as the game came to a close.

Even as the Suns seemed to pull away at one point in the fourth quarter, the Rockets were able to make it a crunch-time battle with a 122-121 win.

The Suns continued to task ball-handling duties primarily to Devin Booker and Cameron Payne on Friday. Chris Paul, 37, remains out as he nurses a heel injury. Paul’s heel injury has kept him out of action over the past 12 games for Phoenix.

Though it may have not been expected, the Suns haven’t necessarily missed Paul’s game primarily due to Booker’s MVP-like ascendance. Booker put up 20 first-half points against Houston, signifying another dominant scoring night.

Deandre Ayton found himself on the opposite end of the spectrum, going scoreless with two rebounds. It was a complete 180 from Ayton’s latest outings.

Despite Ayton’s absence in the scoring and rebounding department, Phoenix was able to lead going into halftime. Mikal Bridges stepped up after having a few low-scoring games, putting up 15 first-half points. Bridges also grabbed six rebounds.

Bridges’ bounce-back game is a good sighting, but the Suns will need their entire core to contribute in order to fight off a hungry Rockets bunch.

Ayton was able to briefly come to life during the third quarter. After going scoreless in the first half, Ayton managed to put up six points along with four rebounds in the third quarter. Though it doesn’t equate to recent success, his small contributions helped the Suns maintain a lead during the quarter.

Booker, who’d showed no signs of regressing in his scoring success, was able to reach the 30-point mark in the quarter as well. Booker finished the quarter with 33 points and seven assists. He also shot 3-of-4 from downtown.

Phoenix as a whole has enjoyed a pleasant shooting night from three-point territory. The Suns have shot 48.1 percent from beyond the arc.

Be that as it may, the Suns enjoyable lead began to slip as time winded down in the quarter. Though not as successful from the field, Jalen Green has made most of his points come from the free throw line. Green is 11-for-14 from the charity stripe. In contrast, Phoenix has only attempted 12 free throws through three quarters.

Despite that, the Suns have maintained their side-to-side ball-sharing mentality, with 25 assists through the three quarters. It allowed the Suns to close out the quarter with a 10-point lead.

Seeing as how Phoenix’s lead has slowly diminished, stopping Green should be a priority in the fourth quarter.

It was clear that the Rockets were going to push the Suns to the brink in attempt to pry away a win. Payne had other plans, as he put up eight quick points to open the fourth quarter. He and Booker were up to 50 combined points for the game by the start of the quarter.

With the Rockets only down by seven at the seven-minute mark, it became a question of when head Coach Monty Williams would insert Devin Booker to help extend the lead out of reach. Booker’s been playing heavy minutes lately, and given Bridges’ scoring, Williams used the optimal window to give Booker some extended rest.

Yet as the Rockets cut the lead to two from a Jabari Smith, Jr. three-pointer, Booker’s rest came to an end.

The Rockets were able to take a 110-108 lead around the four-minute mark. Houston’s run came with a balanced effort along with rigorous effort from its bigs in Smith and Bruno Fernando.

Houston appeared to be attacking from every angle, leaving Phoenix without time to form a last-minute defensive strategy.

On top of that, Booker seemed fatigued as simple free throws seemed to fail him towards the end of the game. Even so, Booker and Payne were determined.

In what ultimately came down to a last-minute play, Booker’s final shot attempt was a no-go, as the Suns lost their first game after seven wins.