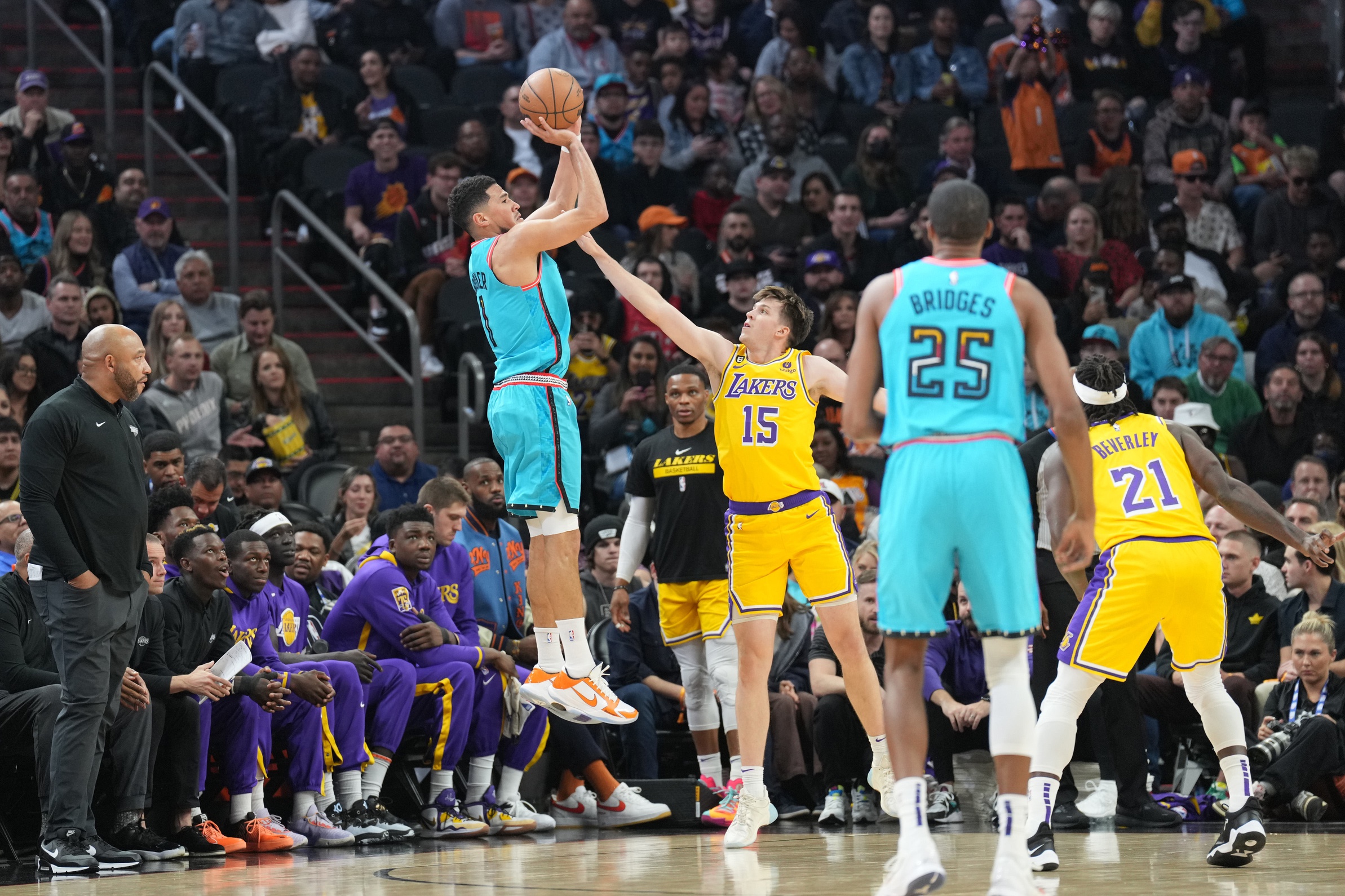 After getting off to an impressive start on the season, the Phoenix Suns were looking to start their next winning streak against the Los Angeles Lakers. Phoenix had only lost one game at home coming into Tuesday’s contest against Los Angeles.

Phoenix was able to continue improving its home record, extending it to 9-1 in the early season. Though it came down to the final minutes, the Suns walked away with a 115-105 win over the Lakers.

Despite Devin Booker having a rough time finding his shot early, he was able to contribute late in the first quarter. Even without Booker, Mikal Bridges took on the mantle as scoring leader throughout the first half. Bridges ended the first half with 16 points on 4-of-5 shooting from three-point range.

The Suns were missing scoring production from Ayton, who only had four points throughout the first half.

Anthony Davis was well on his way to another MVP-caliber performance with 14 points and 10 rebounds, as the defense couldn’t find a way to stifle his success from in the paint. The Lakers were also outmatching the Suns in getting to the charity stripe. LA was up to 14 attempts at halftime compared to Phoenix’s three.

With that, the Lakers were able to steal the lead late in the second quarter, going into halftime with a two-point lead.

The Suns were eager to show their difference in strength to start the quarter. Phoenix opened the gates on a 10-2 run, forcing the Lakers to call a timeout around the eight-minute mark.

The Lakers were able to keep a close trail on the Suns mostly in part to both Davis and Lonnie Walker IV’s play.

Even so, Booker seemed determined to pick up where Booker left on in the second half. Booker was up to eight points in the third quarter with five minutes remaining. He ended the quarter with 23 points on the night.

Bridges also connected on another three-pointer during that timespan. He was up to 21 points by the end of the quarter.

The missing piece to the Suns’ run was Ayton’s ineffectiveness from a scoring perspective. Despite putting up an impressive 13 rebounds, he hadn’t managed to score in the third quarter, leaving him with four points still.

Free throws quickly became a focal point during the third quarter as well. The Lakers had attempted 20 free throws with four minutes left in the quarter compared to the Suns’ meager three attempts.

The Suns maintained a short lead for most of the third quarter, but Davis’ impact was becoming more than Phoenix could handle. Davis was already up to 26 points along with 17 rebounds with two minutes remaining in the quarter.

Despite the Lakers’ many attempts, it wasn’t enough to stop a hot-handed Suns squad that lead 86-79 at the end of the quarter.

Head coach Monty Williams decided to sit Booker for the start of the fourth quarter, which could’ve possibly played out against his favor. Yet even as Booker made his way back into the game, his shooting wasn’t on the Suns’ side.

It was Duane Washington, Jr. that held the course of leading for Phoenix throughout most of the fourth quarter. He was up to 15 points in the fourth quarter with four minutes remaining. Ayton also came alive during the fourth quarter, in more ways than one. After getting some good touches from the field, getting up to 12 points for the game, the biggest highlight came from an off-guard shove from Patrick Beverley.

Beverley would be ejected from the contest, shortening the Lakers’ defensive power. Booker was also issued a flagrant foul during the messy altercation.

The intensity elevated for the remaining three minutes of the game.

Despite the added aggressiveness from the Lakers, the Suns were able to hold on for the victory.

It was a game that could’ve easily slipped away from the Suns simply due to the Lakers’ toughness on both ends of the floor. Yet luckily for Phoenix, shooting over 45 percent from three-point range was able to keep them ahead for most of the game.

The Suns will now move on to face the Detroit Pistons at home on Friday.