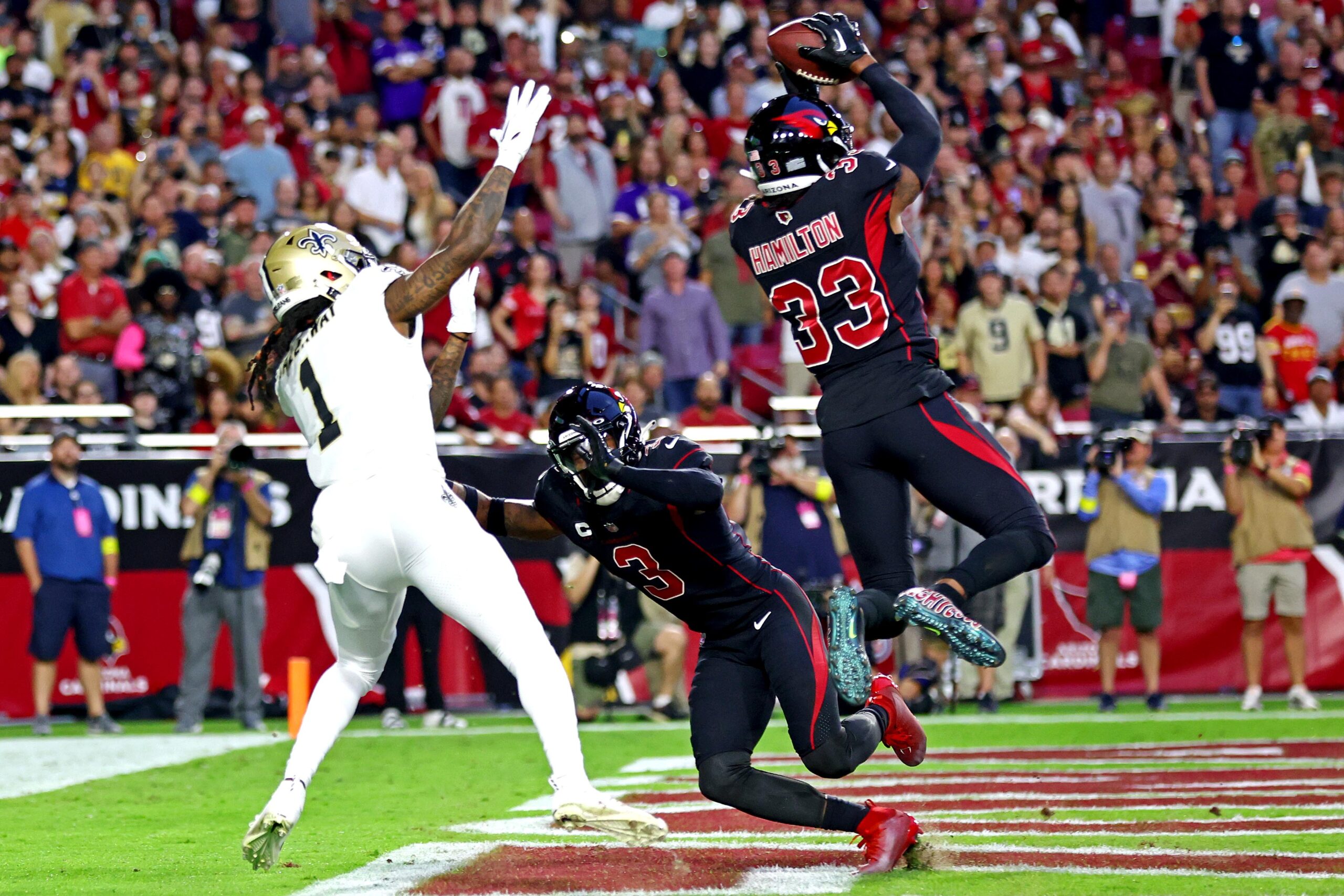 Turnovers were the story of the first half. After jumping out to an early lead, Andy Dalton threw three interceptions, two of which were returned for touchdowns.

Marco Wilson and Isaiah Simmons led the Cardinals to a 28-14 first-half lead.

The New Orleans Saints spent no time messing around on offense. Right off the bat, Andy Dalton connected with Rashid Shaheed for a 53-yard touchdown.

For only the second time this season, the Cardinals managed to put points on the board in the first quarter. After a 31-yard catch and run by Rondale Moore, Rodrigo Blankenship drilled a 50-yard field goal to put Arizona on the board. This was Rodrigo’s first field goal attempt for the Cardinals. It would have been good from 61 yards.

Back on offense, New Orleans picked up right where they left off, driving down the field with ease. In the first quarter, RB Alvin Kamara ran the ball seven times for 37 yards.

However, it was the Cardinals’ defense that ended an eight-minute-long Saints drive. Antonio Hamilton picked off Andy Dalton in the endzone for his first career interception.

Kyler Murray then followed with a little bit of his own magic; an 11-yard rush brought the Cardinals to the 10-yard line.

Unfortunately, Blankenship had to come out on the field again after a failed third down attempt. The Cardinals’ new kicker drilled it from 28 yards out to make it a one-point game.

The Saints got yet another huge play to bring them inside the redzone in a blink of an eye. This time, it was Kevin White who tip toed down the sideline for 64 yards. Taysom Hill then completed the drive with a three-yard touchdown reception.

Arizona finally strung together a handful of 15-yard plus plays, starting with a nice catch and run by Keaontay Ingram. DeAndre Hopkins then followed that up with a 17-yard reception to bring the Cardinals into field goal range for their third drive in a row.

Then Kyler Murray converted a 4th and one using his legs, allowing the Cardinals to finally put it in the endzone. Keaontay Ingram scored his first NFL touchdown with a two-yard rush.

Welcome to the League, @keaontay_ingram!

A two-point conversion later, and the Cardinals tied it up with a little over two minutes remaining.

Soon after tying up the game, Arizona took the lead with a Marco Wilson pick-6. But, in Blankenship’s first extra point attempt with the Cardinals, he was wide left.

In a shocking couple of plays, the Cardinals’ defense was not done yet. Isaiah Simmons picked off Andy Dalton for the third time on the night. Simmons returned it 56 yards for a touchdown.

A Zach Ertz two-point conversion gave Arizona a two-touchdown lead heading into the half.

How Much is At Stake For Cardinals Tonight?
Kyler Murray, Kliff Kingsbury Heated Exchange on Sidelines
Loading More Posts...