Chants of “Let’s Go Birds” Linger Sate Farm Stadium… But For What Team? 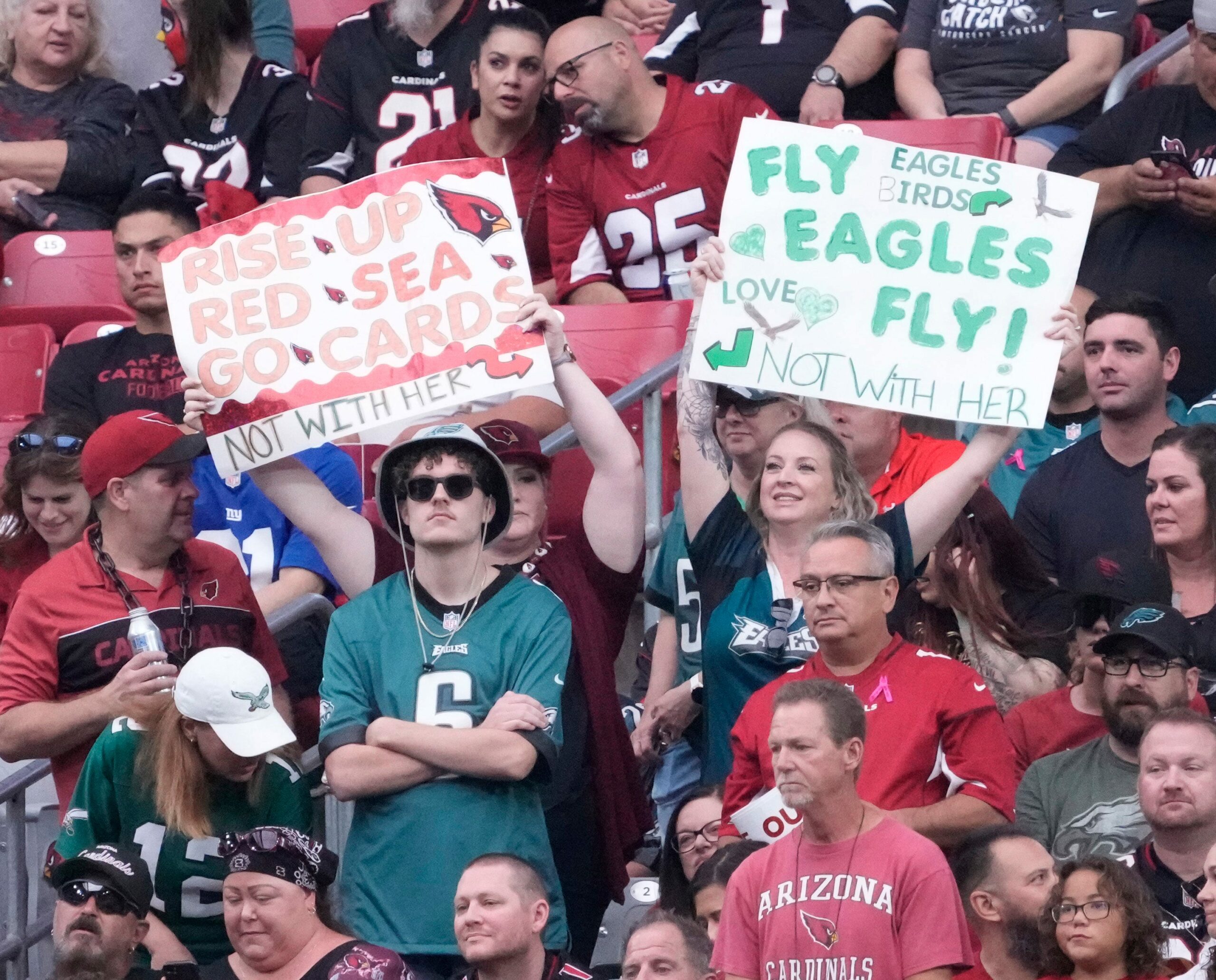 State Farm Stadium got in the Christmas spirit a little early this year as the Eagles came to town. Sprinkles of blue and green littered the “red sea,” making it hard to tell that the Arizona Cardinals were playing a home game.

But who is to blame? With yet another home loss, the Cardinals are now 0-3 this year in Arizona. This adds to the damage from 2021, as the Cards ended the season with a five-game home losing streak. In total, State Farm Stadium has not seen a win since Week 7 of last year.

Given this terrible streak, the Cardinals have found themselves in an unfortunate position. State Farm Stadium is the 29th in the league from a capacity perspective. With the ability to only hold around 64 thousand (expands to 72 thousand), the Cardinals found a problem with not having enough seats. Averaging around 98-99% capacity, home games can be a hefty task to find tickets for. By having such a small compacity stadium, away teams have a much easier job of making a noise.

Yes, the Cardinals’ inability to win a home game is partially to blame, but there is a bigger issue at hand.

Lying next to State Farm Stadium is the largest entertainment district in all of Arizona. Westgate is home to bars, hotels, casinos, arcades, and plenty of shopping choices.

The entertainment district has been home to some of the largest sporting events in all of America. Including 2023, Westgate has been home to three super bowls, the Fiesta Bowl, and two BCS National Championship college football games.

The Westgate Entertainment District has been a money machine for Glendale. State Farm Stadium, in particular, has been able to take advantage of the beautiful complex by having the opportunity to host many major sporting events.

However, the one issue that Westgate has brought forth would be the failure to put Arizona sports fans first. With individuals coming from all across the country, it is sometimes difficult to remember that this is a complex home to both the Coyotes and the Cardinals.

This problem was put into perspective this last Sunday when the Eagles took over the entire entertainment district. On one side of State Farm Stadium, Cardinals’ fans gathered in the parking lot and at the Great Lawn for pregame tailgates. However, on the north side of the stadium, Eagles fans traveled in flocks to take over the entirety of Westgate.

Popular bars such as The Lola and Bar Louie were completely rented out by Philadelphia Eagles fan groups. These pregame parties are setup through travel apps in which fans can travel to see their favorite team in a package that includes plane tickets, hotel rooms, pre-game tailgate party access, and upper-level seating to the game.

When the @Eagles fight song breaks out on an airplane 😂

Of course, this is not to suggest that such packages should not be put in place. However, the issue has gotten to an extreme and the Arizona Cardinals are feeling the wrath. Whether it be from booing home players or opposing team cheers, the Red Sea has not had the same reputation that was once dominant.

The HC of the Philadelphia Eagles, Nick Sirianni, even thanked Eagles fans for “taking over State Farm Stadium.”

“You guys made a difference. Good job” pic.twitter.com/06KmYRjaRw

The Arizona Cardinals this year have lost three home games against three fan bases that travel extremely well. Whether it be the Kansas City Chiefs, the Los Angeles Rams, or the Philadelphia Eagles, State Farm Stadium has found itself being taken over time and time again.

While Cardinals fans enjoy tailgates on the east side, opposing fan bases have taken advantage of the empty Westgate Entertainment District.

At what point does the Cardinals organization take note of this growing problem. Season ticket holders are tired of seeing it, and so is the rest of the red sea. When the home team is being outcheered in their own stadium, you have an issue.

Cardinals Eagles Comes Down to the Wire – Burn City Sports