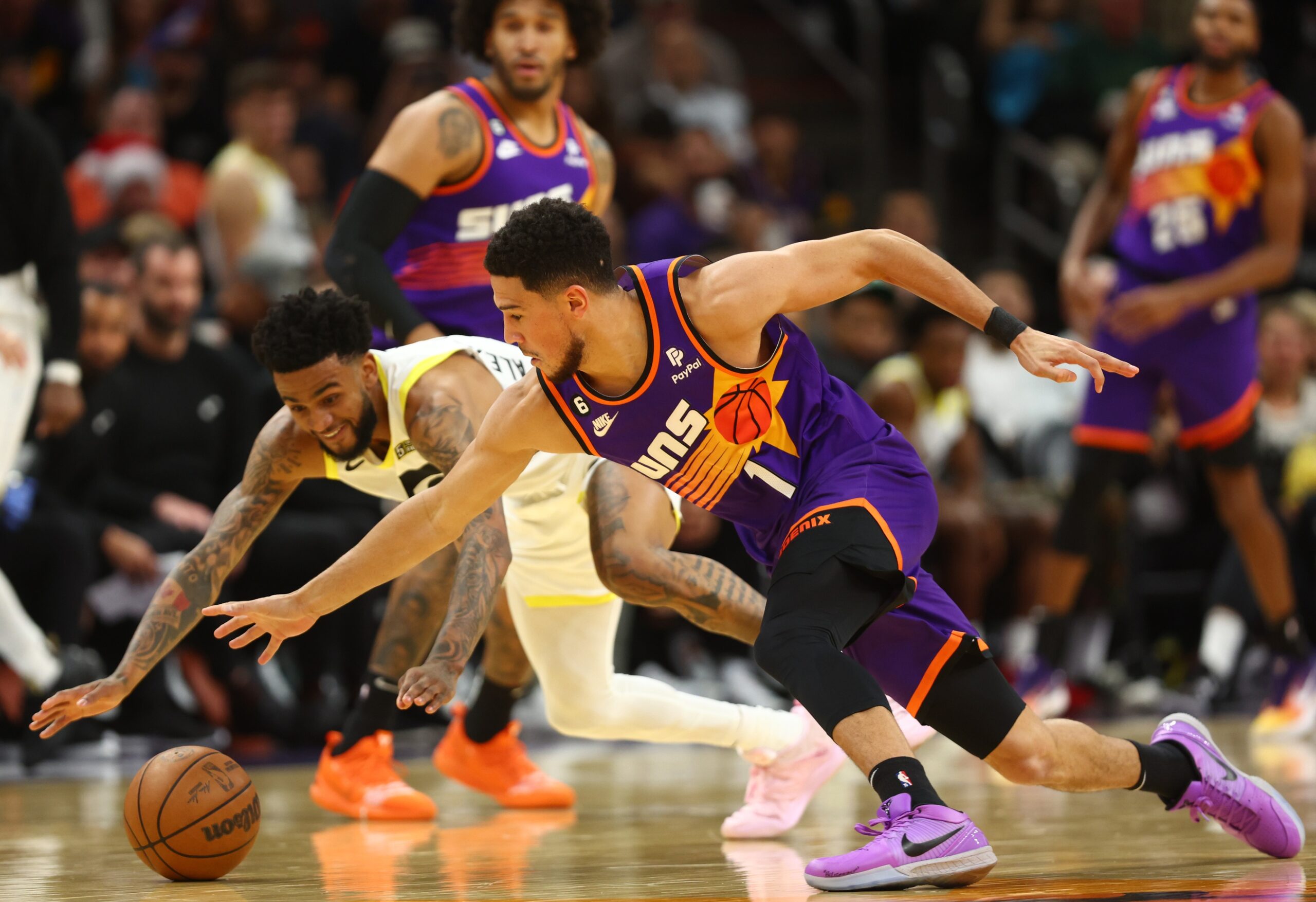 The Phoenix Suns came into Saturday riding a three-game winning streak, which was now at the hands of the Utah Jazz. The Jazz found themselves on the opposite side of that spectrum, losing their last three games in the midst of a road trip.

It was the 10th game that the Suns would be without their leading floor general in Chris Paul, but Phoenix had grown accustomed to being without Paul’s services as of late.

Phoenix wasn’t able to contain Utah throughout the first half, and the contest came down to the wire, with Phoenix stealing its fourth win in a row.

The Suns have been known for their defense throughout the league. The Jazz didn’t seemed phased by that notion though, as they made their presence known early in Footprint Center.

Phoenix tended to stray away from three-point territory given its last outing against the Detroit Pistons. The Suns only shot 20 percent from deep during the first half. As such, most of their scoring came from midrange and the paint.

Devin Booker struggled from the field, going 3-for-13 for eight points, seven rebounds and three assists.

Deandre Ayton and Mikal Bridges picked up the slack in Booker’s absence though. Bridges maintained a perfect scoring half, going 4-for-4 from the field for 10 points. Ayton continued to make his presence known with his face-up midrange jumpers. He was up to 11 points along with seven rebounds.

Stopping the Jazz’s significant scoring runs became a quick issue. While the Suns were able to keep Lauri Markkanen under wraps, it wasn’t the same story for other Jazz players. Jordan Clarkson and Collin Sexton combined for 23 points in the first half, while Kelly Olynyk put up eight points. Utah also shot 50 percent from the field.

The Suns would need a fresh defensive presence while continuing to rely on their midrange game to take the lead.

After finishing with a below-average shooting performance during the first half, Booker seemed eager to separate the Suns from the Jazz. He put up a quick five points as the third quarter got underway.

The Jazz weren’t falling behind, though. Sexton continued to be a dominating presence against Booker. Sexton scored five points in less than a minute, as one basket that came off a steal from Booker. Even with the Suns having a more focused offense, the backcourt would have to be more disciplined on Clarkson and Sexton.

Yet Booker maintained his stance on offense, putting up 12 points in the quarter with three minutes left in the quarter. His scoring allowed the Suns the lead as well.

Phoenix hadn’t received much help from its bench during the the game thus far. The reserves had only made up for seven of the Suns’ 76 points with only a minute to go in the third quarter. That same level of play allowed the Jazz to retake the lead as time started to expire in the quarter.

Clarkson was up to 18 points for the game as the leading scorer for the Jazz.

Booker and Ayton combined for 44 points for the night, though Booker’s came at far less efficiency. Booker did find his way to the free throw line more times than not though, as he was up to seven free throws for the game.

Jock Landale was inserted at the beginning of the quarter, which was a rare sighting as of lately. Head coach Monty Williams has opted with Bismack Biyombo as the primary backup at the center position in recent times.

Landale made sure to give Williams a reason to keep him in the rotation, putting up four points quickly into his insertion. He provided the same frontcourt depth that Ayton would’ve issued, while helping the Suns maintain a slim lead.

The Suns found themselves tied 12 different times as the fourth quarter got underway, which signified the back-and-forth exchanges between the two clubs.

The Suns were able to cool down both Clarkson and Sexton, but Malik Beasley stepped up for a stagnant Jazz offense. Beasley was up to 14 points as he helped the Jazz stay in the game late.

Landale’s game transitioned to the rest of the bench players, and they all poured in decent contributions. Damion Lee was up to eight points while going 2-of-3 from three-point range.

Markkanen came alive during crunch time, as both he and Ayton became the focal points of their respective offenses. Markkanen seemed comfortable from three-point range, while Ayton was making efforts on both ends of the floor.

In a battle that came down to the wire, it was the Ayton and the Suns that proved dominant.