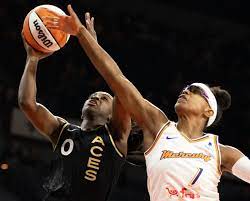 The Phoenix Mercury fought but lost to the Las Vegas Aces 79-63 in game one of their first-round series; Las Vegas led at halftime, 42-37. Both teams scored nine points in the third quarter. The Mercury did their best to hang around, but the Aces pulled away in the fourth quarter.

Phoenix was outscored 28-17 in the fourth quarter as Las Vegas to home the victory. Diamond DeShields led the Mercury in scoring with 18 points on 7-21 shooting from the field; she also grabbed eight rebounds. DeShields was aggressive and did everything she could to help Phoenix.

Sophie Cunningham added 12 points on 4-7 shooting. However, if the Mercury wants to make this a series, Cunningham will need to be more aggressive. Taking just seven shots will not cut it. Megan Gustafson played well off the bench with 12 points, but nobody else scored in double figures.

Phoenix only shot 31.1% from the field and 27.8% from the three-point line. It was a winnable game for the Mercury , but with Diana Taurasi and Skylar Diggins-Smith out, they could not muster up enough offense.

With Dearica Hamby out, the Aces got good minutes from Kiah Stokes, who scored eight points and grabbed 13 rebounds in 31 minutes. Las Vegas picked up their scoring in the fourth quarter after struggling in the third.

Game two of the series is on Saturday night in Las Vegas. Let’s see if the Mercury can score more points and win to keep the series alive.